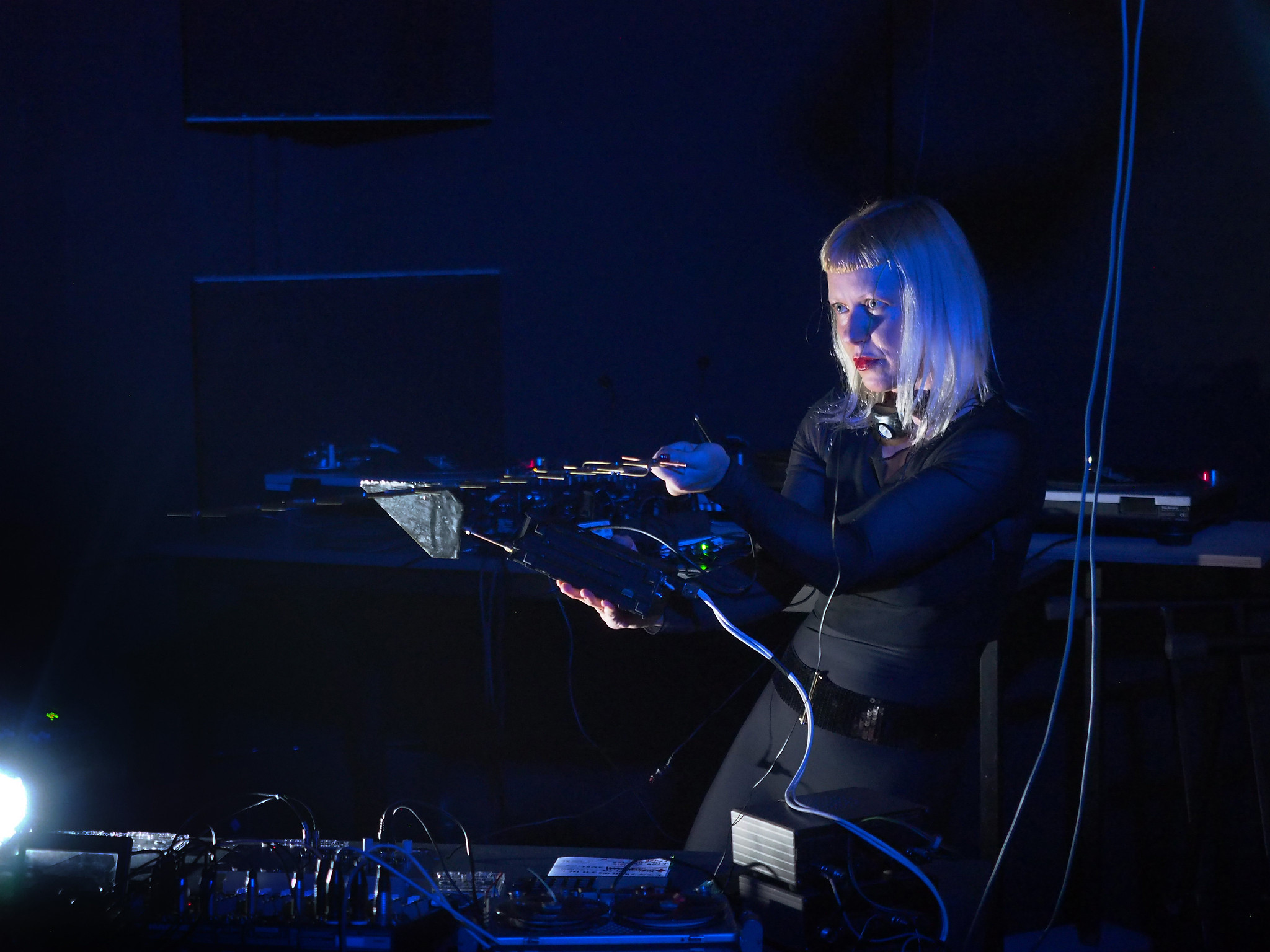 “Without the outside world, I cannot create my music. The audible and inaudible sonic world is an endless source of information that stimulates my imagination, creativity, and awareness, allowing me to enter into boundless territories. Space and its characteristic can be constantly mutable, the personal powers of imagination and critical thinking through self-perception it is an important fact to find and or generate multifaceted sound that crosses it.”

All my work and research is dedicated to my father Giuseppe Zapparoli aka GiZap and his soul. He was a self-taught musician, singer-songwriter, poet, composer and political activist which has always supported my ideas, research, and music in many ways ”

Here a part of his music:  https://soundcloud.com/gizap

” …., the work of Berlin-based Italian sound artist and performer Marta Zapparoli is marked by its sheer adventurousness, unbridled exuberance and gargled theurgy. While no one artist has a particular premium on the (ab)use of tapes, objects, field recordings and effects, in her hands they combine to achieve otherworldly zeniths, cobbled imaginaries where ragged beauty and uglified bliss overlap…….”

“Transcendence and cosmic imagery are elements rich in suggestion from which art has always drawn precious lifeblood, fertile ground that has inspired entire avant-garde movements. A deep fascination that over the years has transversally traversed the musical universe and that still maintains its imaginative force intact. An interesting confirmation of this persistent attraction comes from the latest work of Marta Zapparoli, a visionary sound artist based in Berlin.

Structured in three movements of decreasing duration, “Sonata Per Eterna” is configured as a whirling sidereal symphony shaped from a large sample of radio waves, electromagnetic pulsations and disparate signals hidden in the ether. Rough and noisy matter captured and recomposed to generate a potentially endless journey, poised between spirituality and science, an atypical sonic translation of a romantic idea of the path of regeneration of a soul…”.

Marta Zapparoli is an establish Italian experimental sound artist, improviser, performer, independent researcher. She is active in sound art since 2003 and her work has been shown and recognized worldwide . She lives and works in Berlin since 2007.

Her project and research have been focused for years on the exploration, and self-made recordings of acoustic ecology, noise pollution, vibrational sound, underwater sound, machinery, and EMF (electro-smog) in urban and industrial/post-industrial spaces, using a variety of microphones, sensors, ultrasonic, detectors, some of them self-built.

Since 2014, Her work mainly involves the intersection of the visible and the invisible aspects of physics- seeking to activate all the poetic and conceptual levels. Planning and capturing unique self made recordings of environmental energy, electromagnetic radiation coming from our Ionosphere, signals from outer space and radio waves from radio communication have been central. Involving logistics and technical research, this activity uses science to explore invisible worlds that are constantly present with us but outside the normal range of perception.

In her work there is an attempt to create a unique sonic dialogue between “Natural” and “Technological” world, a reflection on Nature that is imitated by technology, and the behavior and transformation of Nature in an anthropogenic age .

She employs a wide range of experimental techniques and equipment. She uses scientific and technological tools including: antennas (some of them self-built), trees as natural antennas, detectors, radio receivers, SDR software, radio transmitters, as medium to make music.

She spend a lot of time in out door recordings, capturing electromagnetic radiations all over the planet.

During her live performances and site-specific sound interventions, she composes and/or improvise in real-time using the prerecorded electromagnetic radiations on analog tape recorders, reel-to-reel tape machine, mixed with real time radio waves detection, using sculptural antennas hanged in the performance-space, detectors, SDR, and radio receivers. She transmit back the invisible spectrum to the audience, orchestrating the vortex of information into a symphony, creating a unique psychedelic/sonic emotional experience of our present and a deep connection with the Universe . She is fascinated and interested in the instability, constant mutation, and unpredictability of these waves, and their multiple effects on humans. Her sonic expressions are visionary and disruptive since they can transgress the acoustic borders, pushing the listener into critical thinking, awareness, and also an auditory imagination . During live performances She likes to step often in uncomfortable zone , Her practices involved the risk to deal with the “unpredictable” in real time, making music out of it .

In 2019 she started an ongoing collaboration with the Astronomical Observatory(Astrofili Urania) in (Italy) to develop a part of her ongoing project, diving into the vast field of radio astronomy. Besides her solo project, since 2010 she is a fixed member of the 24 pieces (Splitter Orchester), She is a part of PAREIDOLIA duo with Liz Allbee, and she has several ongoing collaborative projects with regarded sound artists, musicians, ensembles, multimedia artists, video artists and music theater’s collective.

Marta was extensively featured on WDR3 Open Studio Elektronische Musik Deutschland (2011 and 2018), commissioned piece (NOCTURNAL- Cosmic trammel of vital rhythms) from SWR2 (2021), ZDF TV (2012), RTS.ch radio (2019), and a variety of experimental radio broadcasts. In 2006 she received the MOVIN-UP Award for her field recording project (An Audio Portrait of Berlin).

This may be a good place to introduce yourself and your site or include some credits.

” Without the sound from the outside world I cannot create my music, it is an endless of informations which stimulate my imagination, creativity, awareness, allowing me to enter into boundless territories.

All my work and research is dedicated to my father Giuseppe Zapparoli aka GiZap, He was a self-taught musician, singer song writer and composer which has always supported my ideas, research and music in many ways ”